Agra and the Seventh wonder of the World 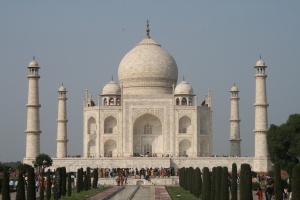 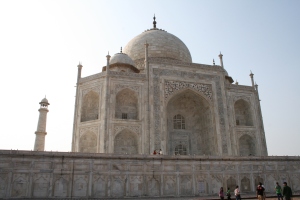 Early morning we set off for what is supposed to be a 4 hour trip to see the Taj Mahal but ends up being an 8 hour trip!  I keep reminding myself that I am here to see this 7th wonder of the world and sleep for much of the ride.  We arrive very late and are greeted by our guide rushing to get as much time in as possible.  There are  no fuel operated cars in the area of the Taj Mahal due to the effects of pollution, so we board an electric bus and are off!  I can hardly contain myself. Stepping off the bus I have a glimpse of the majestic building and gasp, it is unbelievable!  We must now cover our shoes with special socks so that the marble is not destroyed by so many visitors.  Stepping through the gates I am not prepared for my reaction and nearly cry as I see the Taj Mahal, I pinch myself – I’m really here!  I think most of the time my mouth is open in a half smile, half gasp, looking all around I listen to the story of this majesty before me but can’t stop looking everywhere as the guide tells us the background of the building, it is a story of intrigue, great unending love, tragedy and betrayal. Sort of a Shakespearean play. 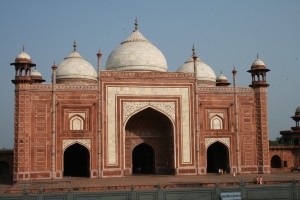 The Taj Mahal was built as one of three last wishes of the Maharani as she was on her deathbed. She was the third wife of the great Maharaja but his favorite and reported to be the most beautiful.  The Maharaja rushed to her side and she asked him to do three things: one to never remarry, two, to always take care of her 14 children and third, to build a large and beautiful palace as a tribute to his love for her.  She died shortly after he agreed to these wishes and spent many years at the side of her tomb, never leaving her side, not socializing and in mourning for a very long time until his daughter begged him to remember her last wish  – build the Taj Mahal. Work began and as it was nearing the finish he began to build a “black palace” for himself, but was imprisoned by the third son of his other wife who wished to prevent him from passing his empire onto his older brother.  And so, the great Maharaja spent the remainder of his very long life inside the walls of another building able to only gaze at the breathtaking creation his had built for his beloved wife. 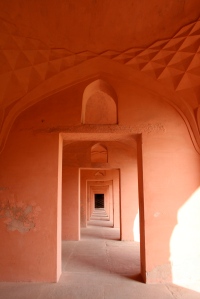 The Taj Mahal defies words, as it is too beautiful to describe, but  will try. It is made of a very special marble produced in Agra that is translucent and is cut in many ways similar to a diamond in order to achieve the perfect reflection of light, thus the changing colors at different times of the day.   Diamonds and gold used to be in the cuts of the ceilings and arches of the gates, but they were removed by the British during the war of independence. The flowers gracing in perfect symmetry are actually inlaid intricately hand cut semi precious gems found in Agra. Each piece of lapis, tiger’s eye, mother of pearl and carnelian is shaved and cut into a myriad of pieces to make the flowers. Each of the four entrances and inside the building these flowers grace the walls. In addition, the marble is hand carved to make beautiful shapes along all the walls of the inside and outside.  At each of the four entrances, the Koran is carved as well and inside a specific chapter is carved around the entire main room which contains the tomb of the Maharaji  – this is in perfect symmetry to the four walls and faces West towards the mecca of Islam. One thing is unsymmetrical and that is the tomb which lies next to hers – that of the great Maharaji who died and was laid to rest beside his one true love.  It is a love story, but is also a tragedy, his “black palace” is seen in the distance, never completed and used now as a park area.

We leave the Taj, I am walking backwards to savor every last minute of this amazing place and go onward to a workshop to see the ancient way the carving of the temple and gem cutting that was used to make the decorative designs of the Taj Mahal. It is wonderful and I can’t imagine how anyone could be patient enough to do this painstaking and creative work. 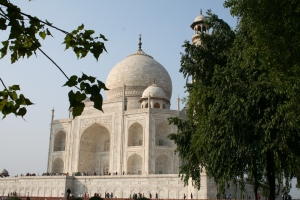 It is getting late and for reasons I may never understand, we must return to Delhi, instead of continuing on to Jaipor – which would have been the logical thing to do. Instead we are traveling another 8 hours (!) only to wake early tomorrow to head to Jaipor.  We have spent 16 hours in the car for a 2 hour journey back in time to the days of majesty.  It was totally worth the hassle, but I would suggest another route to anyone desiring to visit the ‘golden triangle”.

Arriving at midnight, I am to tired to eat and crash with my clothes on. I can’t wait to get out of Delhi and visit Jaipor.