Under the sea, by Sikandra 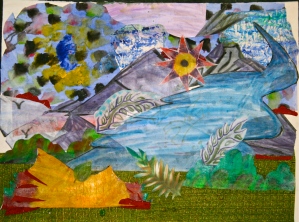 one of the collages created today

When I first arrived at Udayan, I was taken with the fact that there was a fish tank in the girls dorm complete with many fish, decorations and a filter system. I found that interesting as all of India conserves water very seriously and electricity is scarce at times.  My room has a toilet and a bucket. One is to fill the bucket with warm (if you’re lucky) water and then use another small jug to scoop the water and pour it onto your body. It can be tricky at first, especially if you try to wash your hair.  After a few days I got the hang of it and it actually is a great way to save water though you can freeze in between scoops.  (We Westerners can learn a thing or two from this to help with global conservation).

I wondered who fed the fish and cleaned the tank since water was so scarce.  Each day I would look at the tank hoping that I wouldn’t have to face the worst and was happily rewarded with live, swimming fish.  I make a mental note to ask about the cleaning and feeding, but never remember. I just salute them each morning and go about my business.

Today there is to be another picnic, a church and it’s members from Kolkata will arrive.  I get ready for a marathon day of many students coming in to complete or start their collages.  We are working hard when there is a loud commotion outside and the kids pull me out to see what’s up, leaving the studio and my computer behind. I can’t believe my eyes, Saraswati Puja is over and the boys are doing the ritual ceremony of carting the statue around with incense and banging drums and gongs, they are dancing and chanting, basically have a grand time getting really rowdy. You are supposed to take all the offerings and throw them into the Ganges, but since that’s too far, they bring her to the “pool”  – which was a pool but now has fish in it and is rather like a pond. All the offerings are thrown in, then the boys jump in with all their clothes on, along with everything they can find, including any unsuspecting people.  The kids ask auntie to come a little closer, but I’m wise to this game and have no intention of swimming with my clothes on. The church group has arrived at the school, this time with a caterer for a their picnic. There is music and delicious food for the guests, who watch in amazement as these boys go nuts with their singing and boisterous behavior.  Back to the studio we must go, until it is lunch time. No one wants to leave the scene before us, the boys are  getting rowdier and louder jumping and splashing. The girls join in too, it’s a riot. 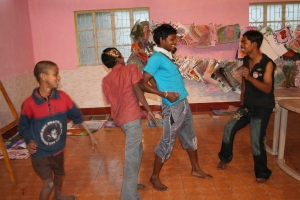 getting rowdy after the ending puja ceremony

I leave with a small procession of children following me to the art room. We must be quite a site, like a mother duck and her ducklings. We are working, zoned out again, when a man appears and wishes to talk with me. He is one of the church members  but was curious to see where we were going. He admires the children’s work, asked many questions, including if he and some of the others could purchase the collages. I explained about the exhibit, and he asked to be invited, providing me with his address and asking for my name. 20 minutes later, Taniele has called to ask that I come immediately to the picnic area. I have been asked (rather ordered) to join them and have a meal (now this is my third meal of the day and it’s 3 PM).  This is a very interesting group of older men and women, very kind and genuinely interested in Udayan and the children and my work. I sit for a few minutes, they are watching me eat every morsel (of course with my hand as tradition dictates), I cannot say no as they continue to pile on food and sweets. This is really good food, though I wish one of the Udayan dogs could sereptisiously eat some of the food left on my plate so I won’t insult the group. I  must get back to the art room as I have left the kids there, unattended, with my computer on. I’ve told them  NOT TO TOUCH THE COMPUTER or there will be a very angry not so funny auntie to deal with. They are working like angels when I arrive.

We finish, exhausted but happy, to find the finals of the cricket match going strong, so I stay to watch India win. Then off to the room for the shower I didn’t have this morning as there was no water. I enter the building and as usual, check out the tank.

OH NOOOOO, there’s a large fish hugging the side of the tank. I call for the housemother saying, fish is dead!  She says no, it’s sleeping. She bangs on the tank, as do I, now we are both banging with keys and my lock for the door. The fish doesn’t move.  Later, after feeling upset and taking my shower, I reappear to check on the situation. The fish has now moved downstream to the other end of that same wall of the tank, still hugging the wall with it’s mouth agape and looking very dead. Once again, I ask the house mother and she once again says, fish not dead, “see moved to other side”.   I’m thinking, yeah, it moved with the current but the darn thing is not alive. I know a dead fish when I see one, unpleasant as it is.   There is nothing I can do,  so I sigh and go for a walk around the grounds, return to the room and watch one episode of my downloaded 30 Rock.  Then I fall asleep and I swear I have a dream about swimming. I awaken in the early morning and my covers are off, I have definitely been swimming in my sleep.