Untapped Genius and a Bora Hanaman 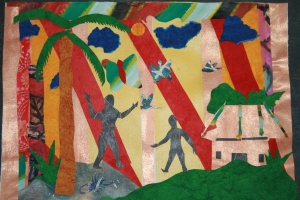 One of the first completed collages 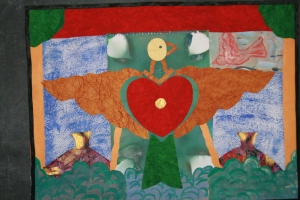 These kids are awesome!

Just give them your time and some paint...magic!

It is Saturday and I am pressed for time. I need to get enough collages finished so they can be framed. I lost a day yesterday as I fell ill and couldn’t get out of bed. Still sick, I went to the art room to teach anyway. Would rather feel miserable but working with the kids than feel miserable in my tiny room.

We started at 8 AM  with 11 of some of the most talented students who have demonstrated an understanding of my technique as well as passion for the work. The room was silent, everyone was in the “zone’ and I put on some Hindi music to keep the pace going. Within 3 hours, 4 of my students had completed an entire collage!  Not once did they ask for help, as I had been concentrating on making rounds to the ones who needed a little push, some guidance, I was shocked when they called me over to show me the completed collages.   As awful as I felt physically, I was euphoric !  Lunch came ad went, no one wanted to leave the art room, so we continue to pull a painting marathon. It wasn’t until the light has gone that we realized we had worked all day without a break, and that we were almost missing dinner. These students stayed to spotlessly clean the room, and we all left together, our passion solidifying our friendship. I felt complete.  There is quite a bit of untapped genius here – these children would be in  elite art schools if they were from any other place in the world. I am determined to keep pushing them, hoping that when I return next year many will have graduated and possibly be on there way to schools for the arts. 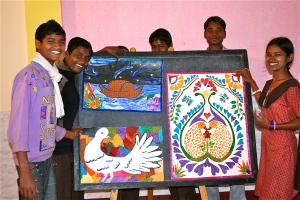 The "artist's colony" hangout in the art room

Since the start of the school Olympics, there were cricket matches each day and today was no exception. As I exited the art studio the match was still on  – these passionate students, so sensitive and quiet while working in my art room were intense as cricket players, so serious and competitive. Taniele and I laughed as we both remarked that we could be at any school in America or Australia or anywhere, and the students would not be different; just boys in a major competition, fiercely playing and cheering their favorite teams on.

On my way to my room to pack up for Kolkata – I was going there to rest, see a doctor and take a break, I was urgently called by Taniele and several girls shouting “auntie, monkey on the roof”!  I had no idea what they were talking about, I knew there were jackals, foxes and dogs, but not monkeys hanging out at the school.  I grabbed the camera, flew over to the playing field only to find hundreds of the little ones squealing with delight as they watched a bora hanaman (very large monkey) sitting on the roof, eating a banana, unfazed by the commotion below. He eventually moved to the rooftop overlooking the cricket match and seemed to be watching the game.  As the children persisted to yell at him and laugh, he moved about (I think trying to escape) these “crazy creatures” below- it was to no avail, everywhere he went the children followed. Finally getting annoyed, he took the flowerpots which lined the roof and started hurling them at the children below. With my camera in tow, I tried to shoot a few pictures, only to be abruptly stopped – he hurled one at me, missing me by a few inches. Guess he didn’t like paparazzi – I decided to take refuge and pack my things to leave for Kolkata. 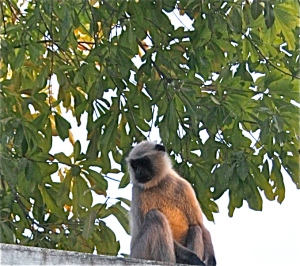 Bora Hanaman watching the crowd below

I arrived at the Taj Bengal where I was to stay as Shamlu had other house guests in my room. It was a great move as the manager recognized how sick I was -I had no voice at this point. He alerted the staff to my demise, and everywhere I went someone was standing there with a hot cup of spices, ginger and lemon to drink. They stayed to watch me drink the last drop.  About every 20 minutes the door would buzz and more tea, hot “toddies” (non alcoholic) and salt to gargle with would arrive.  Flowers came as well, with a note telling me to arrange for a eucalyptus steam, sauna, and aryuvedic massage.  I arranged this for Sunday, and not feeling much better forced myself to make the appointments.  I was glad I did. After a few hours of this pampering, my throat started to feel better, and I felt almost human again. Treating myself to a meal at one of the many restaurants at this hotel, I stuffed myself with salad, fruit and PIZZA!  It rivaled any great pizza in New York. Even though I was under the weather I knew I could get very used to this. The shower was the best ever, and the pillow too – small things we take for granted were a delight . I savored every minute.

By Monday morning, the Maitre D knew me well and ordered all the hot drinks for breakfast and insisted I eat an omelette (he didn’t have to force me) and porridge. Water and juice were served at room temperature so as not to hurt my throat. That afternoon, a friend from Kolkata paid a visit to see how I was feeling and he too insisted on feeding me. I was stuffed but still a little sick. The hotel and my friend called the hotel doctor who paid a “room call” complete with blood work and prescriptions which were filled without delay by the staff.  Rick ( my doctor husband) had sent me with a small arsenal of medicines and had started me over the phone with the correct antibiotic.

By Tuesday I felt well enough to return to Udayan. I loaded up on chocolates for the girls in the dorm – it was the birthday of four of them and there was to be a celebration. I also loaded up on oranges, bread and olives, having had my share of rice, rice and rice at the school.

The ride back was early in the morning, so early that I was treated to a remarkable site – goat herders walking their flock in the middle of the main roads in Kolkata-unbelievable!  Here, in this city of great buildings, shops, shacks and hustle and bustle, vying for a piece of the road crammed with all the vehicles and animals and every conceivable being and object was this man, oblivious to the noise and commotion, as his goats walked peacefully to their home, having grazed for the day.  What a country of contrasts.

One response to “Untapped Genius and a Bora Hanaman”